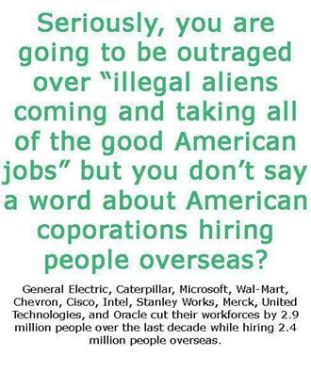 No freaking kidding. Corporate employees work in an environment with the constant real or perceived threat of having their jobs sent overseas. The insecurity is palpable. And that is on top of the outsourcing already being done to companies within the country. Not to mention having entire departments converted to outsourced companies, where you keep your job but are employed by a different firm. Or having your position turned into a contractor position, where you retain your job but are converted to a non-employee contractor. Then there are consultants brought in to take over entire projects–a consultant firm bringing in their own employees to do work regular employees used to do. And companies not filling open positions but instead filling them with a series of long term temps, many of whom are laid off employees of the same company now bringing them in as temps.

Or there’s having your position reduced from 40 to 30 hours so you no longer receive any benefits (though as often as not the position still has a 40 hour work load, meaning a thirty hour employee winds up working an hour or so a day unpaid.) Or having your position taken over by the management company who owns the building, who in turn lets you go or brings you on as a contractor, often through yet another company, so you have been outsourced twice but still keeping the same position–but with no benefits and less pay. Or seeing an incredible amount of work done by unpaid interns who have to work 40 hour weeks and meet all sorts of job requirements that people were once paid for. Or staff working from home, which eliminates the need for so much support staff in the office. Or services that can be accessed online or over the phone that do many of the tasks once performed by company employees.

And finally finding all kinds of tasks once done by human beings that are now being performed by websites and apps, a process that increases by the day and has all by itself eliminated millions of jobs. And will continue to eliminate millions of jobs. The internet, by taking over tasks that once required people, has annihilated the middle class and reduced the working class to penury all by itself, more than all the others things I listed here put together.

Upper management is doing well, however. With pay, bonuses and promotion based on the quarterly report and share price, it’s all about saving money, cutting corners, reducing employee costs and cutting out benefits. That is how you get into the top twenty per cent of US income earners. And that is why that top twenty per cent has over 80% of all the wealth, and over 90% of the available cash in this country. You drive around the vast well off stretches of any American city–the westside of L.A., parts of the San Gabriel Valley, my own neighborhood of Silver Lake–and you’ll see areas that had once been middle class neighborhoods and are now upper class. One out of every five Americans lives in those neighborhoods. The rest of us don’t. People rail against the top one per cent as if the rest of the 99% are the victims. But it’s more than the top one or two per cent, it’s the entire fifth of Americans who inhabit the upper class. They are the money class, the wealthy class. The ruling class. They are the ones who didn’t get outsourced or laid off or have their benefits slashed. They are the ones who won the class war that was declared in 1980.