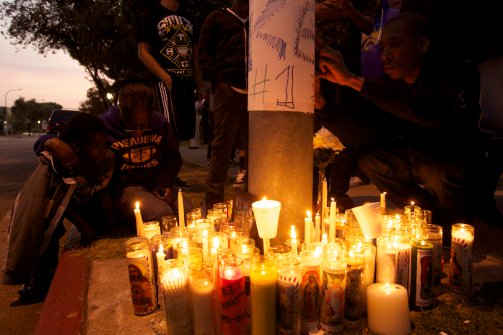 Kendric McDade never even got the dignity of a public hearing.

Think about it. The Pasadena police officer who first shot him fired at point blank range from a darkened patrol car without any verbal warning whatsoever. Didn’t even yell at him to stop. He just fired. His partner then shot McDade several more times. Then they cuffed him as he died. And though McDade was innocent, wasn’t the guy the cops were looking for, and was unarmed, he was a black guy reaching for a cell phone. “He left the sidewalk and he’s running at me,” the officer told investigators. “This — this scares the crap out of me. I don’t know why he is running at me. He’s still clutching his waistband. I think he’s got a gun. I’m stuck in the car. I got nowhere to go.” Fearing for his life, Griffin said he fired four times through the open driver’s side window. McDade was two or three feet away.

McDade never knew what hit him. The DA, reading Officer Griffin’s testimony, decided it was justifiable. Instead, blame was laid on McDade for being in the wrong place at the wrong time with a cell phone, and on the guy who called in a robbery report. The guy said the perpetrator–who was not McDade–brandished a gun. No gun had been brandished. So no action was taken against the officers whatsoever. Not a goddamn thing.

This case completely weirded me out at the time. A cop killing by surprise like that, just like a mafia hit. Made me wonder what they teach Pasadena police at the Academy now. Profiling, obviously, black man, white cop. Self preservation. Not a lot of guts, though, not if they’re so scared they pop off citizens like that without any warning whatsoever. Maybe they could teach guts at the Academy. Courage. Intestinal fortitude. McDade’s death was about as cowardly a police shooting as I’ve ever heard of. I don’t think police are cowards, not at all. Just the opposite.  But I’ll make an exception in this case.

Oh well, McDade wasn’t the first innocent victim to be killed this way. Certainly not the first young black man. But I thought it was the scariest. The ugliest and most cowardly. Just how low are the standards for the Pasadena Police Department?

But then no one remembers Kendrec McDade anymore. And the Pasadena Police Department hid the names of the officers who killed him, never did tell us. (We found them out later, much later, when all was safely swept under the rug.) Then that guy who made the 911 call had to pay $3,000 to the Pasadena Police Department. Imagine that. The police were the aggrieved party, not the family of the man they ambushed and killed because one of their own was too scared to protect and serve anyone but his own skin. Talk about hiding behind a badge.

I am not a cop hater. Things like this don’t get me screaming about Amerikkka or making absurd comparisons to Nazi Germany. I don’t think all cops are killers, nor do I think all cops, or even almost any other cop, would pull a cowardly stunt like the police officer who fired from that car did. There are plenty of good police officers in Pasadena. Excellent officers. But how could you tell when the department turns egregiously bad and very fatal police work into justifiable behavior? What a great message that sends. There has to be some sort of accountability when police error kills an innocent person. But in this case there was absolutely none. It’s a travesty. You or I would never, ever get off on a homicide like that, ambushing and killing someone. We’d be charged with murder in the first degree. Maybe we’d get it reduced because the guy scared the crap out of us, too. But there is no way we wouldn’t do a stretch in prison. And there’s no way we could hide our identities, either.

You can tell the DA and judge knew this was a crock, that this Oscar Carrillo was taking the fall for the Pasadena Police Department. You can tell because all the big talk of charging the guy with manslaughter–basically saying the he pulled the trigger and killed McDade–was suddenly and mysteriously dropped. Carrillo pleaded guilty to filing a false police report. He’s said he was robbed by a man with a gun. It was from that report that the police decided they had to kill Kendric McDade. Had you or I done that the very same D.A. would threaten us with a charge of cold blooded murder. Then let us settle for settle for a more appropriate conviction of manslaughter. That’s what they did here, threatened Carrillo with a long prison stretch but accepting a conviction for letting him off for filing a false report. He got ninety days, another ninety days community service and then had to pay the Pasadena Police that $3,000. Not a hand was laid on the cops who shot him. Not even a whisper.

I bet there are people in the District Attorney’s office that still get queasy when they think about how they handled this case. And I bet they don’t talk about it, ever. I bet they never tell their children what they did.

Justifiable homicide. Self defense. Officer Griffin suspected the man on the sidewalk wanted to kill him. So he blasted him first, several times. He couldn’t miss at that range. I don’t know if McDade’s cell phone remained on his belt or went skittering across the sidewalk, harmlessly. But I am absolutely flabbergasted they knelt down, rolled him over and cuffed him. He had eight holes in him. There must have been blood everywhere. I don’t know what those officers were thinking at that moment. But if they handcuffed a dying man they weren’t thinking the right thing. They knew he was a goner, and that they might be too. So they were trying to get their story right. How to explain away killing a completely innocent citizen guy by mistake. That’s what they were thinking.

I’m sorry this piece is so goddam angry. So goddam angry that the writing’s not the best, the structure a little messed up, repetitive. I’m sorry if I’ve pissed off any other police officers who might see this, which wasn’t my intention at all, and I’m sorry if some people in Pasadena might think I should shut about all this because I don’t live there. But sometimes you can’t help being angry. And some people can’t help being dead either. The living cover their asses and all is forgotten. Wrong place, wrong time.

Not to change the subject, but back in analog times in Los Angeles. a turnip was a turnip and a rutabaga a rutabaga, and grocery stores had rutabagas by the homely heapfuls come Thanksgiving. Admittedly it’s not a pretty thing, a rutabaga, sort of a dull sickly purplish on top and a messy dirty faded […]

Just tried to mail an envelope. You forgot the return address Fyl said. I tried writing it legibly, failed, scratched it out, tried again but it was even less legible than the first attempt. I stared at the envelope helplessly. Fyl rescued me with a self address sticker. It glowed with candy canes and gingerbread […]

Watched Downstairs last night, from 1932, in which John Gilbert is incredibly convincing as a vile, thieving, conniving lowlife of a chauffeur with no redeeming virtues whatsoever. Weird choice of role for a leading man with a career on the rocks, weirder still that he’d written the story himself and wanted to do it so […]

Sorry there’s no more of the great gobs of prose I used to spill out all over these blogs. People have been asking. Alas, epilepsy was really fucking with the long essays, and I finally had to stop. Had to stop working too. Had to stop just about everything. It’s been a couple years now […]

Sorry there’s no more of the great gobs of prose I used to spill out all over these blogs. People have been asking. Alas, epilepsy was really fucking with the long essays, a d I finally had to stop. Had to stop working too. Had to stop just about everything. It’s been a couple years […]

Not to change the subject, but this is how evolution gets all fucked up.

Sorry there’s no more of the great gobs of prose I used to spill out all over these blogs. People have been asking. Alas, epilepsy was really fucking with the long essays, and I finally had to stop. Had to stop working too. Had to stop just about everything. It’s been a couple years now […]