Saw a story on Slate today, about Mitt Romney and his 47% comments. Imagine being saddled with that for the rest of your life. But then he’s rich so the hell with him. Just kidding. He’s a job creator. But that Slate story reminded me of a piece I found that I’d written the day after the election that discusses that very same percentage point, 47%. (the final was Obama 51.1%, Romney 47.2%). I published it on the blog back on November 7th and promptly forgot about it. It’s old news now, a nearly forgotten story and almost entirely irrelevant…but here it is anyway. 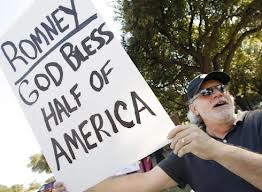 Well, not quite half of America.

Looking at the votes still being counted in the west, it’s looking like Romney’s final vote national tally will come to 47% Maybe I’m wrong, but some quick math and county projections (using a calculator and the CNN interactive map) sure make it looks like Mitt Romney got the support of 47%, just not the 47% he wanted.The talk today about just how close an election this was is not borne out when you include the votes from the Pacific coast. Romney got creamed out here, and the popular vote was not anywhere near as close as the Media is insisting today. Right now Obama has a lead of about 2.75 million. By the time the rest of the west coast is tabulated I suspect Obama’s lead will be more in the four million range (it was actually just shy of five million). That’s over three percentage points. Maybe I’m wrong, but the counties on the coast that are less than 100% tabulated (some barely half counted) are running anywhere from 1.5 to 1 up to 4 to 1  for Obama, and all are significant population centers.. That’s where that extra million and a half Obama votes come from. This pushed Obama well over 50%. Right now he is at 51%. This will only rise as the last votes are counted.
Obama has gotten over 50% of the vote twice now. The only Democrat since FDR to have gotten a bigger percentage of the total vote was LBJ in 1964. Twelve years later Jimmy Carter barely got 50%. Bill Clinton never did. JFK didn’t. Truman didn’t. Which means that Barak Obama is the first Democrat since FDR to have gotten more than 50% in every presidential election he ran in. On the GOP side, only Eisenhower and Reagan have also gotten an absolute majority in all their presidential elections. And believe it or not, Obama got a higher percentage in 2008 (52.9%) than Reagan did in 1980 (50.8%). A lot of the media is reading this election as a close run thing that leaves Obama weakened. I say look at the numbers. It’s a shame the networks never give the West Coast votes their proper weight before making their judgements. Obama had a very solid win, and the Democrat party had a very solid win. The GOP retained the house (tho’ losing some seats) and therefore governing will be a brutal battle…but the GOP took a very, very heavy hit last night, Romney got his clock cleaned, and the conservative movement will be slow to realize just how bad a day yesterday was. This will dawn on the media soon enough.One last thing….the pre-election polls were actually fairly accurate. Their numbers weren’t that far off from the final result. What was wrong was how the media analyzed the polling data. They read those numbers as if it were 2004. The data was there, the press just refused to see it. Hence this stunning Obama win…which shouldn’t have been so stunning after all. I was playing with an interactive electoral college map (on CNN’s site, before CNN’s site became unusable…they need to increase their bandwidth or something) and using the polling data I couldn’t see how Obama would not get near or over 300 electoral votes. Meanwhile the press was freaking out about an electoral college tie. Why I do not know. In fact, the media was going on and on about a repeat of 2000, with Obama losing the popular vote….when all they had to do was think for a second how many west coast votes were about to come in. There was no way in hell that Romney’s apparent popular vote lead would last. It was utterly ludicrous. Maybe when you put a dozen commentators side by side analytical skills disappear. It is entertaining, though, all that frantic chatter. I just wished I had switched stations to see Karl Rove flip out.